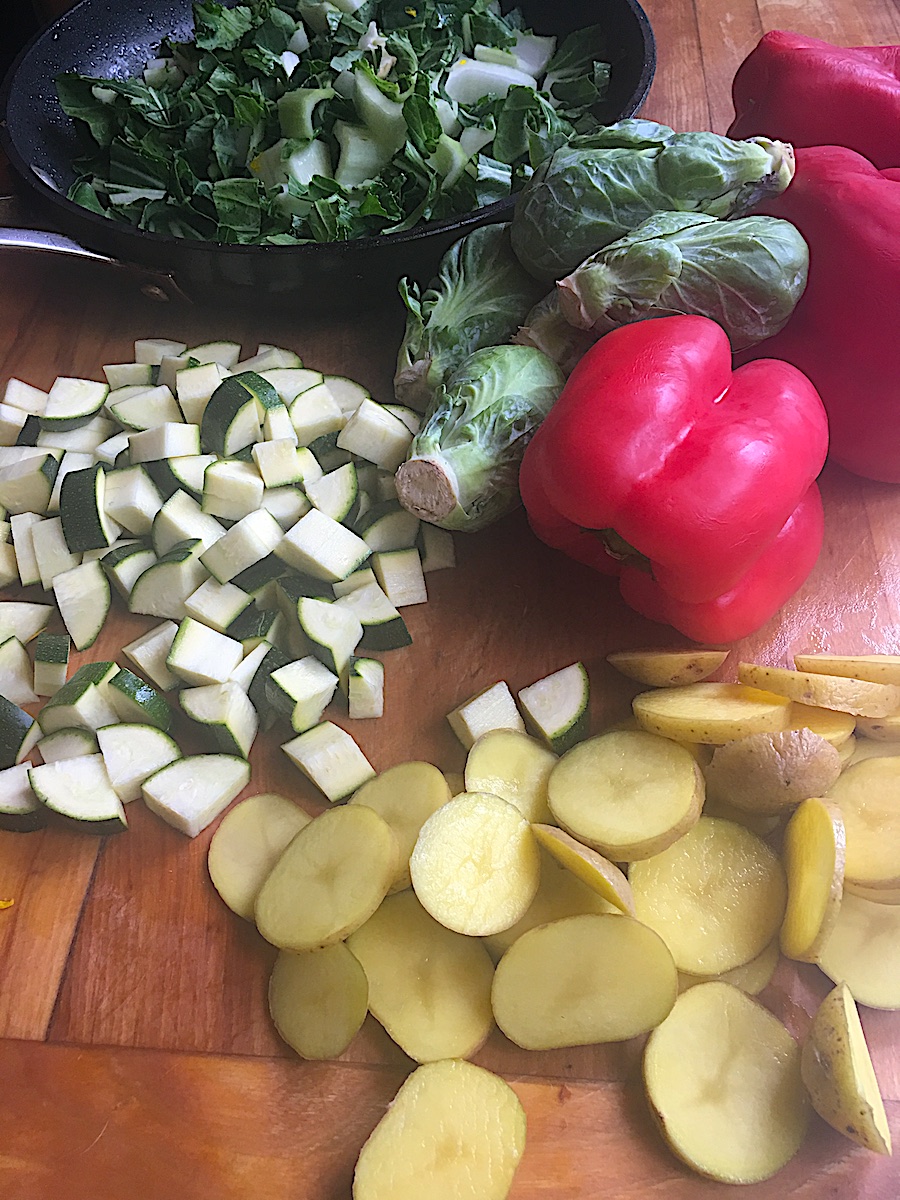 This ‘recipe’ was inspired when I had to use a variety of produce in my fridge after having been unexpectedly away for a few days. Not wanting to make a kitchen sink type stir fry (which at times I love and it always results in something interesting) I opted to use this as an opportunity to write a piece on food prep at home going pro!

One of the many things I learned from years of professional food prep was that how food was prepped would determine how I’d end up using it. Makes sense right? Therefore if I prepped food in basic simple ways and did so by ingredient, I’d have many choices in how I’d end up using it in a dish. I love last minute choices! I can go with my mood…both in my wardrobe choices and in my food choices. 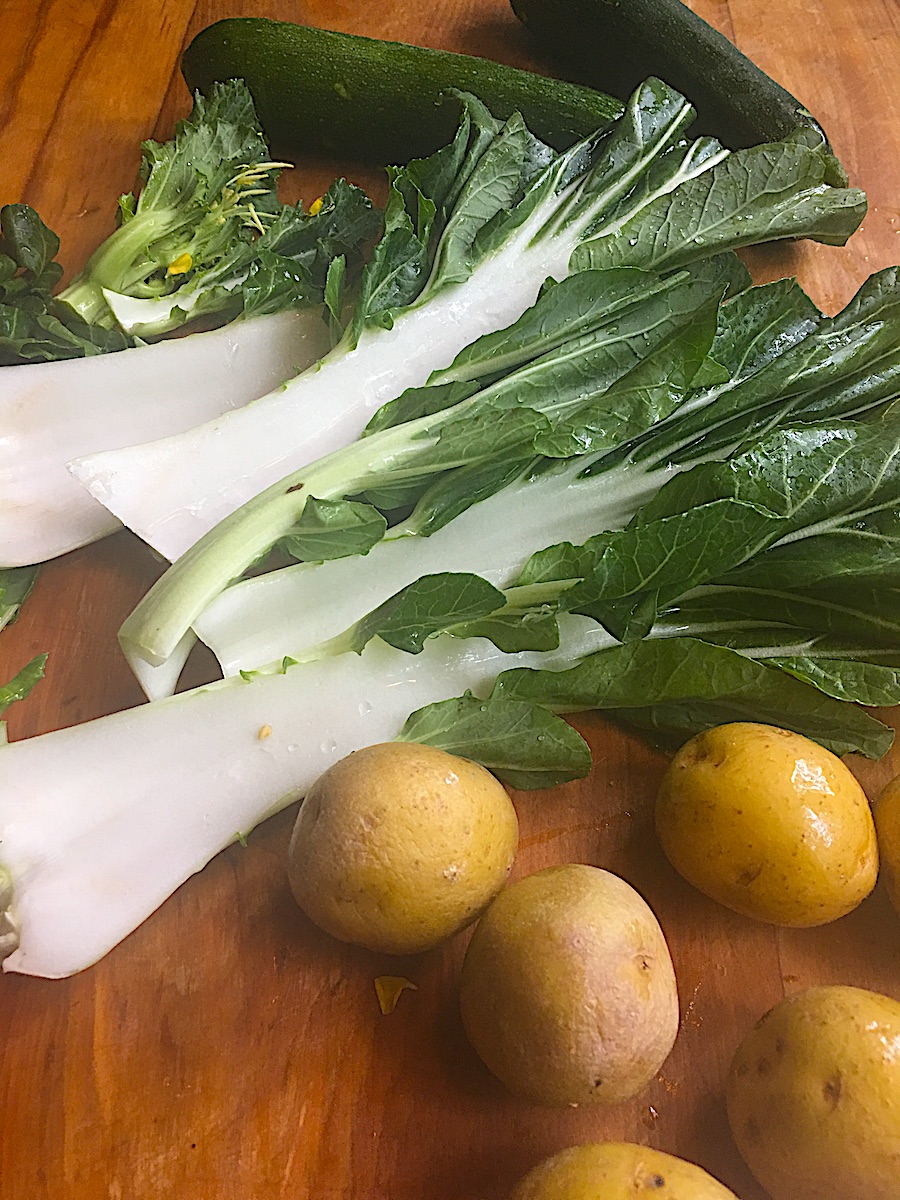 The first things I pulled out was some bok choy with yellowing outer leaves, some starting to go soft gourmet potatoes, and some zucchini. 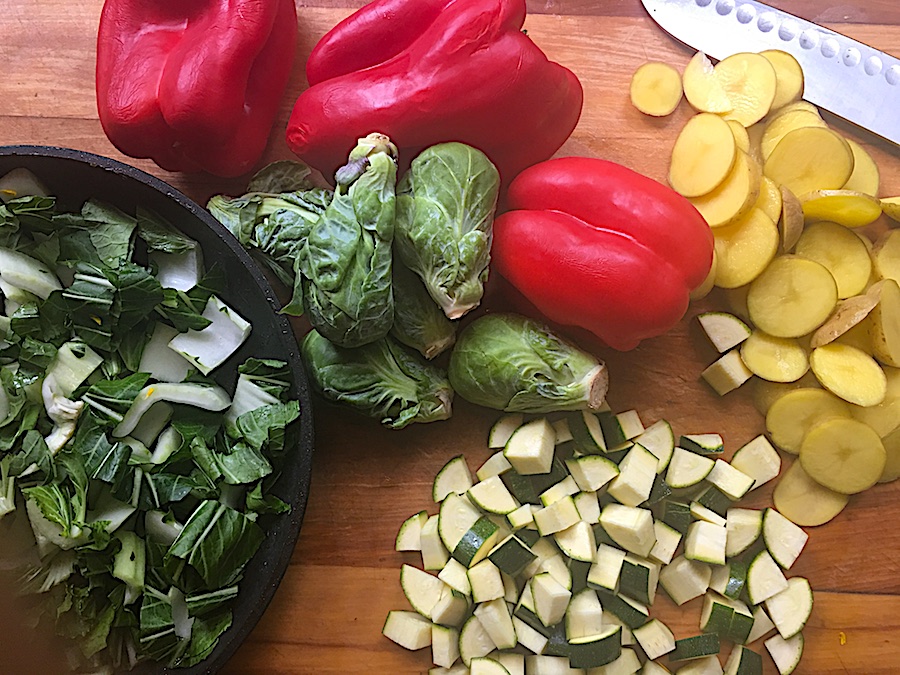 Then I pulled out some brussel sprouts and red bell peppers, diced the zucchini, sliced the potatoes, and sliced and sautéed the boy choy (after discarding the outer yellow leaves and giving the other leaves a good washing) in a bit of olive oil, salt, pepper, and a bit of chopped fresh ginger. 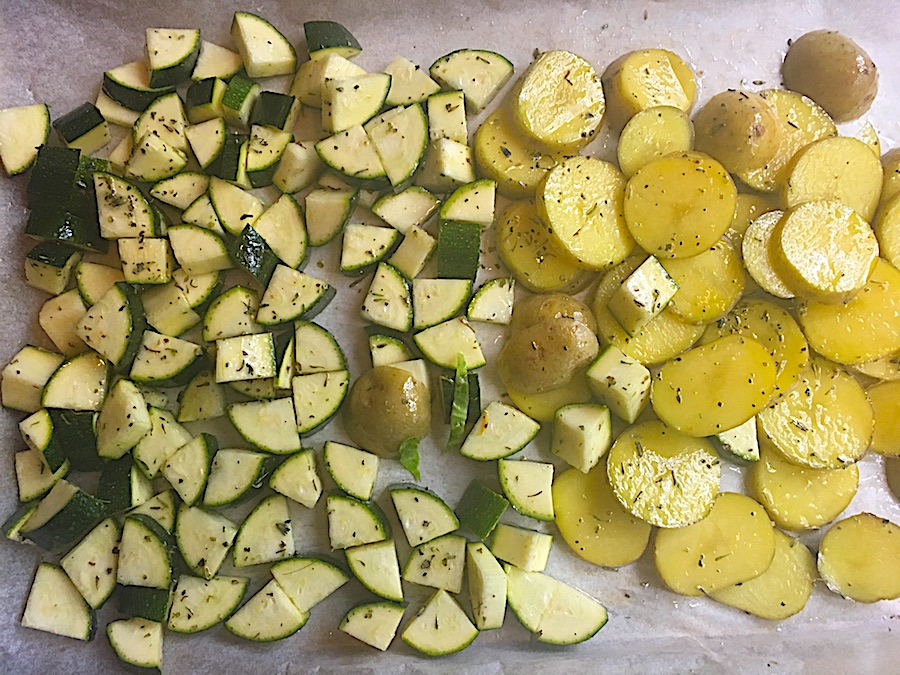 I added the zucchini and potatoes to a parchment lined baking tray and tossed them with salt pepper, olive oil and a generous sprinkling of herbs de province! 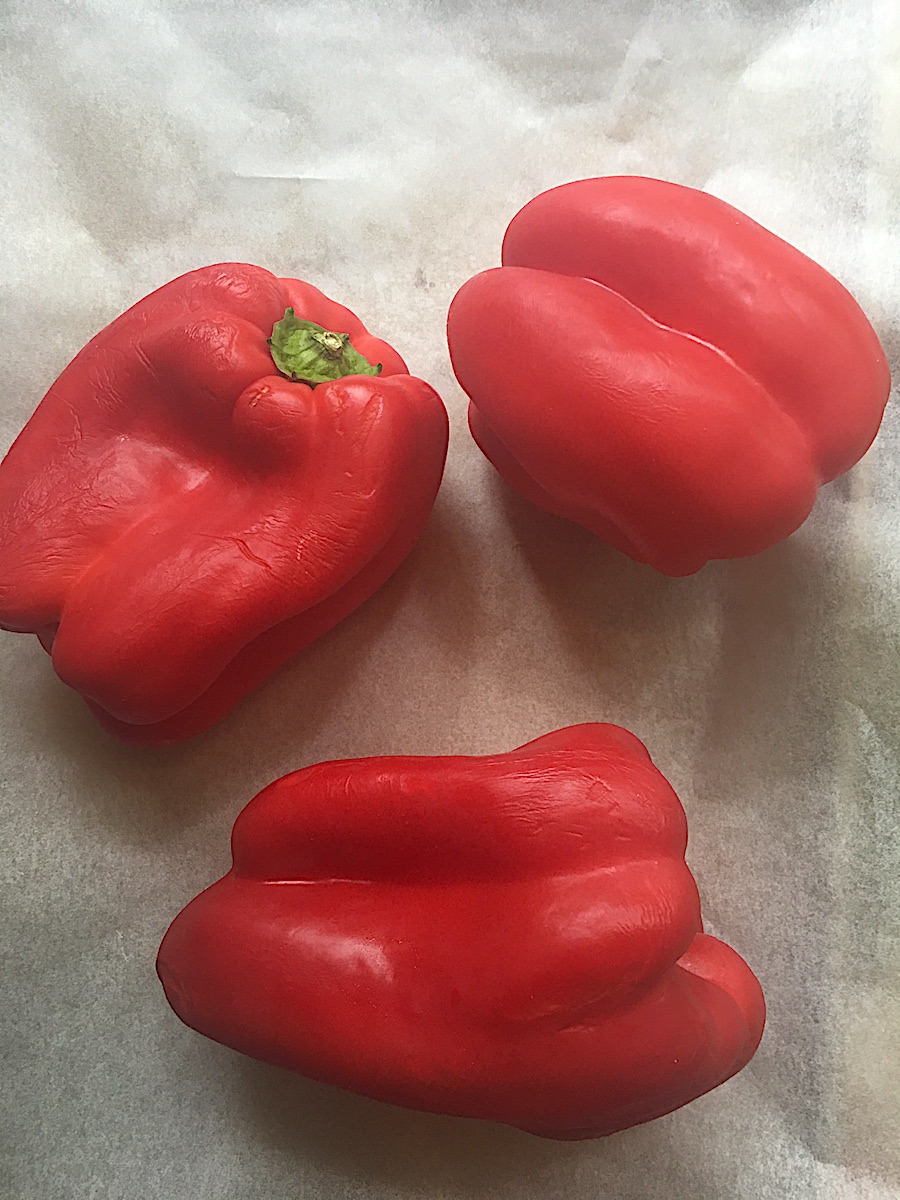 The red peppers went in whole and unadorned onto a parchment lined baking sheet into a 400 degree (204.4 C) and roasted until the skin bubbled and dark like this…at which time they’ll be stored in a brown paper bag or in a bowl and covered with plastic wrap until they’re cooled and can be peeled, seeds removed and dressed with oil, garlic and salt. 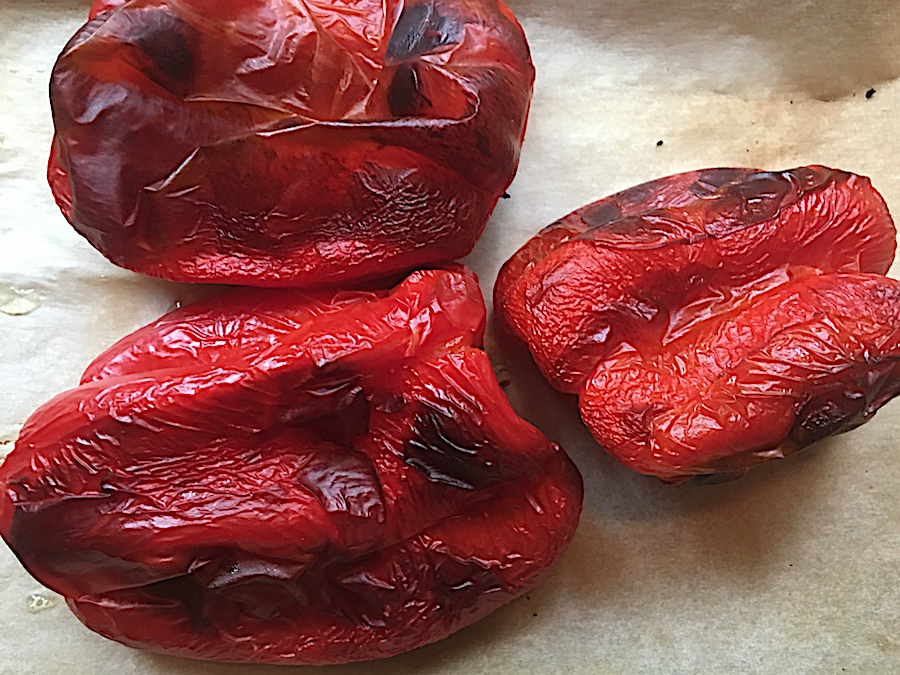 The potatoes and zucchini went into the oven at the same time but where done in about 10 minutes or so and about half the time of the peppers. They were ready when tender but still had a bit of bite to them like this. And can I say the potatoes were so good they barely made it to a storage container. 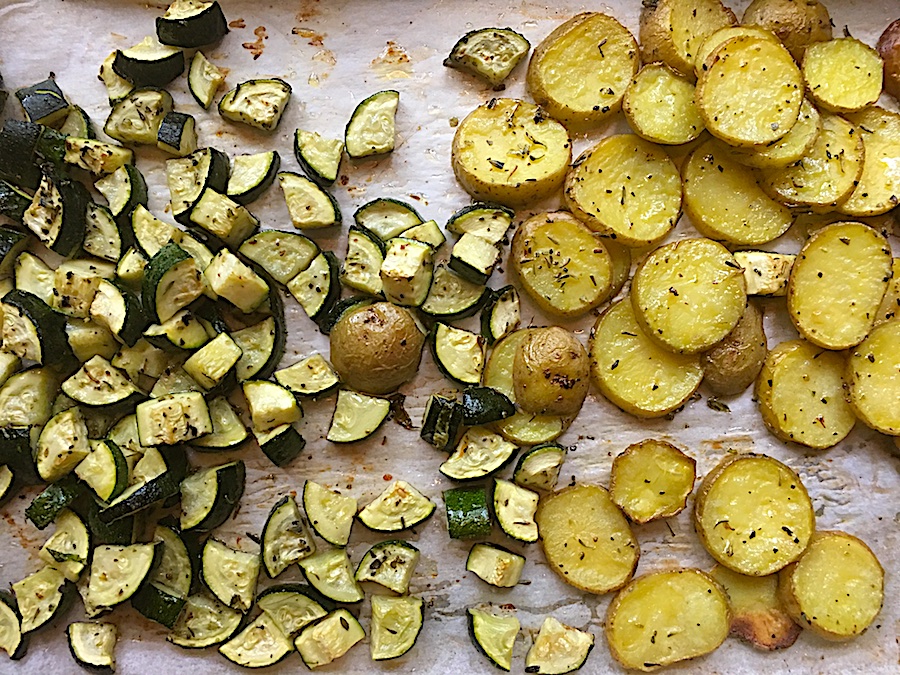 The sautéed boy choy was ready in about 2 minutes! One of the many reasons I love sauté! It’s so fast!!

And so was the thinly sliced brussel sprouts which were sautéed in a bit of olive oil, garlic, a pinch of red pepper flakes and seasoned with salt. 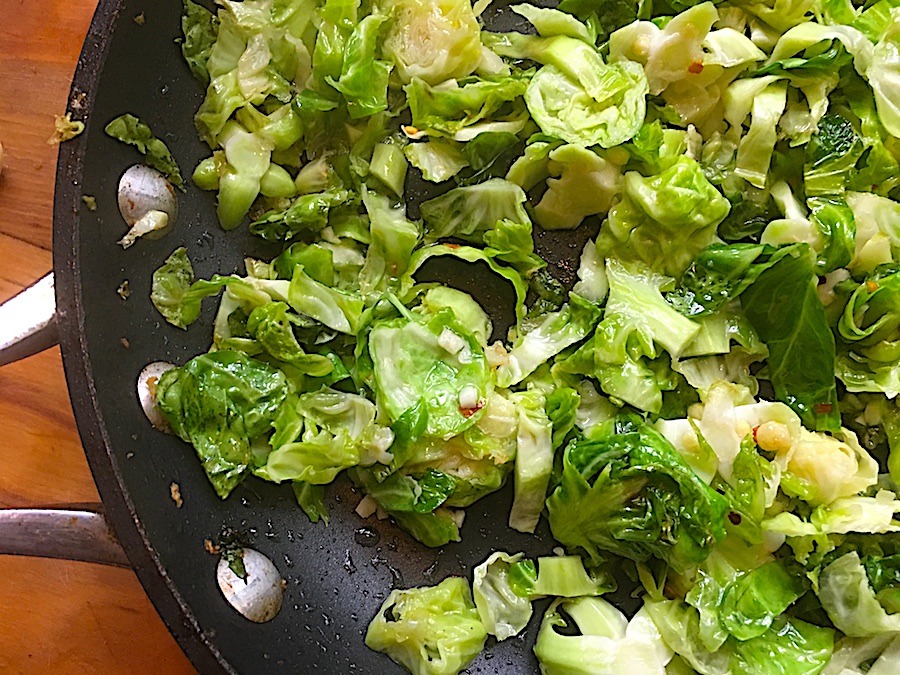 It all ended up being stored for later use in sandwiches, wraps, salads, soups, pasta, omelets. Oh my!! What will I make next? 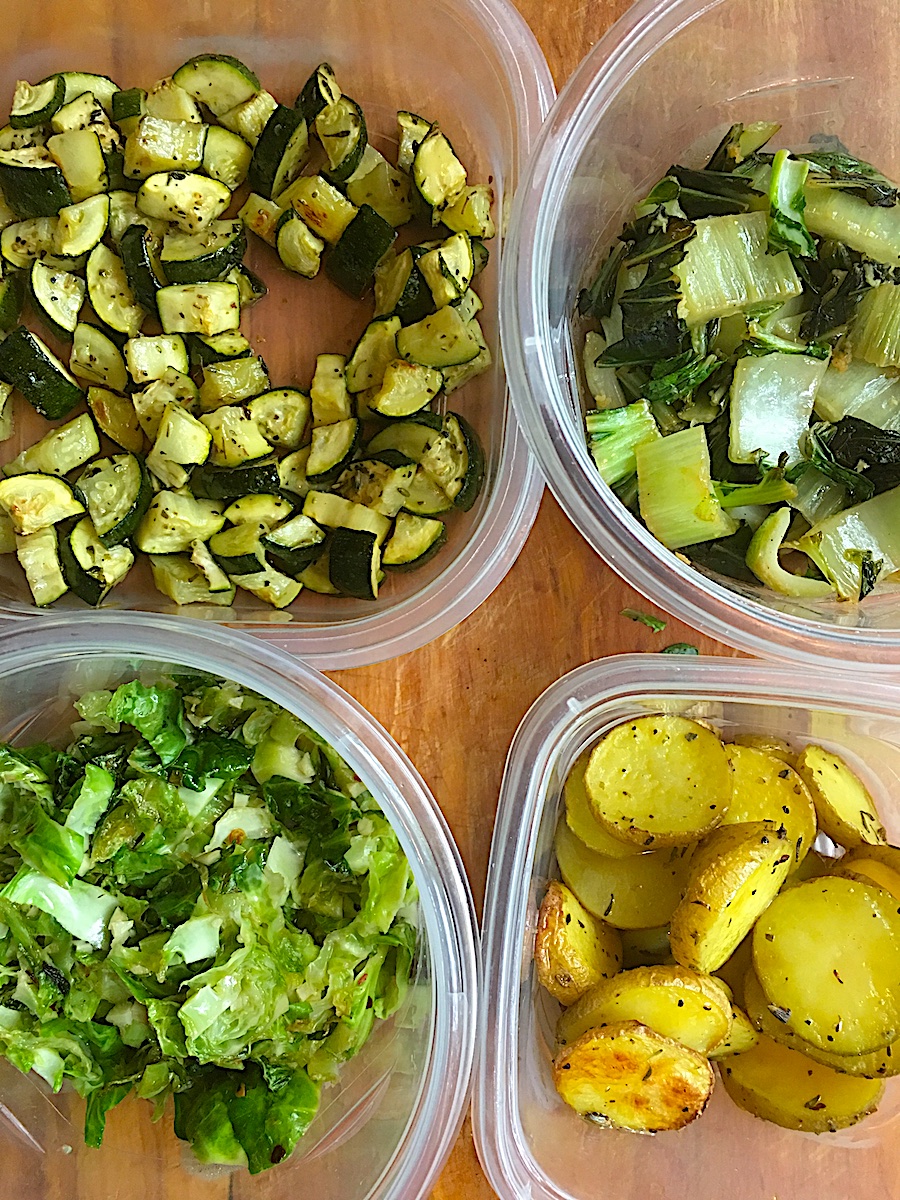 Note: the peppers were not ready for this party and peeled and dressed the next day.