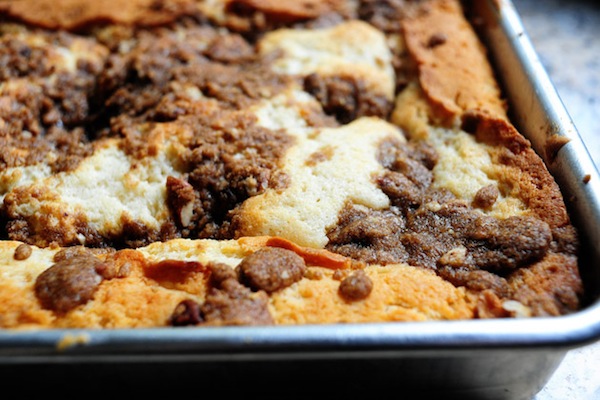 Recently my cravings centered around coffee cake. I craved it during the frequent snow storms that kept us hostage in the northeast this winter and I crave it in the morning still with a freshly brewed cup of strong coffee. And now when it seems the rains won’t stop and the dreariness of the afternoon sky, even from the openness of a wall of windows overlooking the lake from my cottage view, nothing makes me feel better as quickly than a cup of tea and a piece of this coffee cake I baked. I figured that if I loved coffee cake than it was about time I baked one instead of resorting to the supermarket bakery for a poor substitute with 47 ingredients listed on the label. So I did!

This recipe is an adaptation from a recipe by The Pioneer Woman who said she confiscated it from her mother. She titles it “The Best Coffee Cake Ever”. I have to agree. It’s amazing. In my version I added less sugar (1.5 instead of 2 and I plan to add even less next time), low-fat milk instead of whole and walnuts instead of pecans. Next time I make this I want to add wild blueberries on the bottom. It’s a great recipe as is or as a basic for variations. You will love this. Careful though it could easily become an obsession.

Cream butter and sugar. Add flour mixture and milk alternately until combined. Don’t over beat. Fold in beaten egg whites with a rubber spatula. Spread in a well-greased 9 x 13 (or LARGER!) baking pan. A cake pan with higher sides would be best.

In a separate bowl, combine topping ingredients with a pastry cutter until crumbly. Sprinkle all over the top.

Bake for 40 to 45 minutes, or until no longer jiggly. Serve warm—delicious!

8 Responses to The Best Coffee Cake