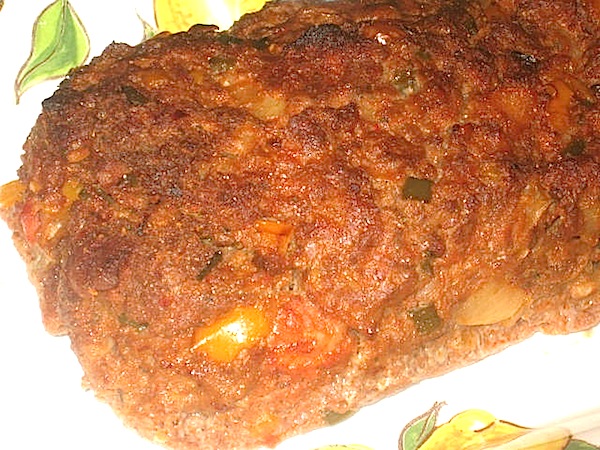 For years in my restaurant I would make a meatloaf flavored with eggplant. Most of the time, I would grill the eggplant, chop it up, and add it to a mix of ground turkey and sausage meat. Recently, I began roasting the eggplant (sliced side down on a sheet pan) in a 400 degree oven, then scoop out the softened pulp and add it to whatever mix of ground meat I was using. The eggplant – whether roasted or grilled – would add both moisture and flavor to an otherwise boring meatloaf. This remains one of my classic recipes. However for this meatloaf recipe, I decided to try something new.

I experimented one night recently on my son, his girlfriend and a friend who were staying for dinner. Being that my son is a big fan of Mexican food, I decided to flavor this meatloaf with salsa (an idea I got from the tavern were I recently worked). I chopped a large onion, a beautiful, sweet yellow bell pepper. a couple of jalapeños and fresh garlic into a medium dice, sautéed them briefly along with a spoonful of tomato paste and a pinch of cumin, and added them to the meatloaf mix consisting of roughly a pound of ground beef and a pound of hot Italian sausage (removed from its casing). The mixture was moist so I added a bit of breadcrumbs, about a teaspoon of sea salt and a bit of ground pepper. I formed a loaf and baked it in a water bath in a 400 degree oven for about an hour or until it reached an internal temperature of 145 degrees. Then I let it sit while I whipped up some gravy from the pan drippings, which resulted in an interesting orange colored sauce from the yellow pepper, the red tomato paste and the reddish hot sausage meat.

The result was a moist, delicious meatloaf that my dinner guests couldn’t get enough of and that far exceeded my wary expectations.

In a sauté pan over medium/high heat add a bit of olive oil and the bacon and cook for a few moments then add the onions, peppers, garlic and sauté for about a minute until they begin to soften. Add the paste and stir to incorporate with the rest of the ingredients. Add a bit of water if necessary to help mix. Cook for about another minute and remove from the heat. Season with salt pepper and the cumin. Cool slightly and add to the meat mixture which should be in a large mixing bowl and seasoned with a teaspoon of salt and pepper. Add some chopped cilantro or parsley if desired and form into a loaf.

Cook in a 400 degree oven in a water bath by placing the pan with the meat inside a larger pan with an inch or two of water. This will prevent the sides of the loaf from burning. Cook for about an hour or until it reaches an internal temperature of 145 degrees.

In a saucepan over medium heat, add about ½ cup of the pan dripping and ½ cup of flour. Stir with a wire whisk for a minute or two to cook off the raw flour taste. Slowly add more liquid; alternating between the drippings and some chicken and/or beef broth. When it reaches your desired thickness and flavor, lower the heat to low and let it reduce a bit. Add more both if too thick.